Russia tried to stop us from protesting

HRF’s Katia Krasavina attended the June 12 anti-government protests in St. Petersburg, Russia, to protest Putin’s authoritarian rule. Her dispatch, below, details the police’s attempts to suppress dissent before and during the protests. Read HRF’s press release about the protests here.

On June 12, when I arrived to St. Petersburg’s Marsovo field, it wasn’t clear who came to participate in a protest and who was there just to celebrate Russia Day. Reenactors in World War II-era military uniforms were pouring tea for families with strollers, girls in traditional Russian sarafans were setting up for a dance performance, and bearded “warriors” in chainmail were chatting with blacksmiths and vikings. I noticed passers-by throwing perplexed glances at the lines of police vans and “cosmonauts” — riot police in full gear. Media in Russia is so tightly controlled that news of mass protests planned across the country had barely reached the general public. 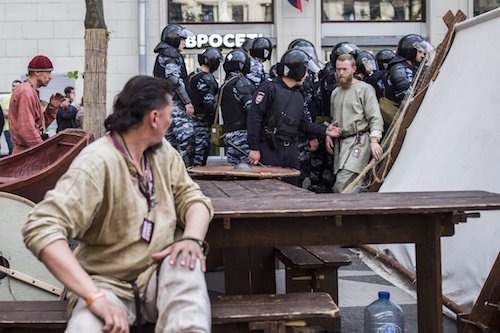 Then, a police officer went on stage, took a microphone, and informed the crowd that we were about to take part in an illegal protest action: “This event is not permitted,” he said. “Riot police are authorized to use force and special chemicals.” In other words, a group of people who had gathered to celebrate their country were being told that if they stayed, they were likely to be beaten up and sprayed with tear gas. Journalists were specifically asked to not obstruct police action.

If you have read anything about Russia’s June 12 protests, you probably know that the peaceful rallies were met with fierce repression, amounting to nearly 1,800 arbitrary arrests, police brutality, and kangaroo courts (which are explicitly prohibited by our constitution). But the truth is that the Russian authorities were cracking down on the protests before they even took place.

Alexei Navalny, a persecuted opposition politician, had called the rally to protest corruption and government overreach. And, predictably, his attempts to organize the rallies were met with just that. Groups in 209 cities across Russia applied for event permits, making it the most geographically spread protest in Russia’s modern history. But the organizers of many of the protests faced all-too-familiar roadblocks. City squares were suddenly occupied or unfit to hold the event, and colleges issued threats to the students planning to attend the rally. An unidentified person firebombed Navalny’s office in Stavropol — and the police helpfully responded by confiscating his staff’s laptops. Tambov city administration even suggested that protesters hold their rally next to the city cemetery. Very subtle.

Finally, on June 11, Navalny published a blog post where he accused the authorities of sabotaging the rally by prohibiting event companies from renting equipment to the organizers. They wanted to undermine the protests by making us look weak and disorganized, he wrote, “so that everyone who comes out will feel like everything is futile, and nothing can be changed.” Navalny wrote: “Yes, we are ready for compromises, but we are not ready for humiliation. We are cancelling our rally on Sakharov Avenue and are moving our very peaceful rally to the Tverskaya Street,” the location of the official Russia Day festival. Since Navalny didn’t have a permit to hold a rally there, this brought a flurry of criticism, with many commenters accusing him of radicalizing the protest.

Remarkably few observers recognize the real purpose of event permits, and many reports on the protests (including coverage in Reuters and The New York Times) left out the reason for relocation completely. Requiring permits and then denying them, using obscure laws or arbitrary rules to prevent organizing, and treating protesters like criminals are all forms of state repression. Russian officials use these “soft-line” policing tactics as an excuse to ban politically inconvenient events and to make activists negotiate with them, undermining their right to assemble peacefully and to hold rallies, meetings, and demonstrations. All those bloggers urging “cautiousness” and warning that since the protests were “unsanctioned,” Navalny was “leading people to a slaughter” failed to recognize that Russian authorities will never welcome a real anti-government protest. Rallies that are sanctioned, like the ones in 2011-2012, still result in hundreds of arrests. Cautiousness is becoming detrimental, and the desire to remain within the legal framework compromises the very rights activists are fighting for.

In St. Petersburg, the authorities denied organizers a permit to hold a rally on the Marsovo field, and even went so far as to reschedule a military-themed patriotic festival, originally planned for a different date and location, to the Marsovo field on that date. Unfazed, protesters had decided to do what Navalny ended up doing in Moscow – join the celebration.

Upon the police officer’s announcement, without taking a single action, festival onlookers suddenly became participants in an unsanctioned rally. Even though we were being openly threatened with violence, without a second’s hesitation, the crowd responded with a familiar chant: “The police are with the people! Don’t serve the crooks!” Reflecting the demographics of the participants — many were students, teenagers, and other first-time protesters — the familiar call “Putin is a thief!” was updated with a response: “Gryffindor,” forming an absurdist rhyme in Russian. A girl next to me yelled back to the policeman, correcting his grammar. 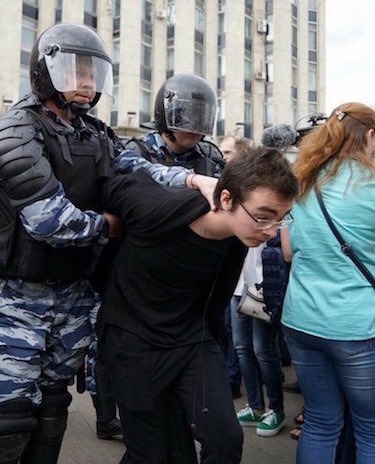 Then, the riot police moved in. I had come to the protest with a friend who was recovering from surgery and was using crutches, so we stepped away from the center of the crowd to avoid being trampled. Even from only 30 meters away, it was difficult to tell what was happening. Occasionally, there would be a swell of chants — “Shame!” — and people would lift their phones and cameras to record arrests. Only later did I find out that more than 600 people were arrested just a few meters away from me. To me, this was a visceral testimony to the importance of free media. In its absence, one can remain oblivious even when seeing the action up close. 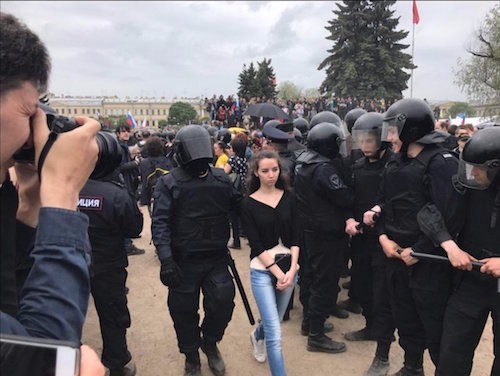 The police did their best, arresting hundreds of minors and even an unlucky tourist who didn’t even speak Russian. The arbitrariness of the arrests is perhaps best illustrated by this video of a Kremlin supporter being randomly plucked out of the crowd in the middle of a pro-Kremlin speech. And police apparently had a backup plan, too. During the protests, I caught a glimpse of a group of young men standing on the edge of the crowd. None of them had bags or umbrellas, none carried posters or other protest symbols. One of them asked me about the yellow ducks many of the protesters carried. The yellow rubber duck became a popular meme and a protest symbol following Alexei Navalny’s anti-corruption investigation of Prime Minister Medvedev’s estate, which included a duck house. Anyone who came to protest would’ve known that. These men were “titushki” — mercenary thugs hired by local authorities to sabotage the protests and make nonviolent gatherings look like riots. This time their services were not needed and the riot police handled the job. 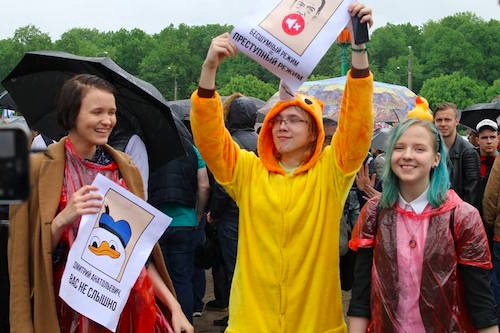 There is no denying that the police have abused their authority to punish protesters after the June 12 rallies. Weeks later, activists face repeated arrests, physical violence and intimidation. But the repression began long before June 12, and it is vital that we recognize the role that soft-line tactics play in quashing dissent. We cannot wait for Putin’s government to approve dissent and protect our right to protest. It will never happen.

Those teenagers who came out to protest for the first time in their life are now facing the consequences of speaking out. Many of them will stay home the next time, while others will become angrier, more cynical – and will be inspired to take more action. One girl told her friend at a rally: “Thank you for bringing me here. I understood a lot today.” In her case, the risk was probably worth it.