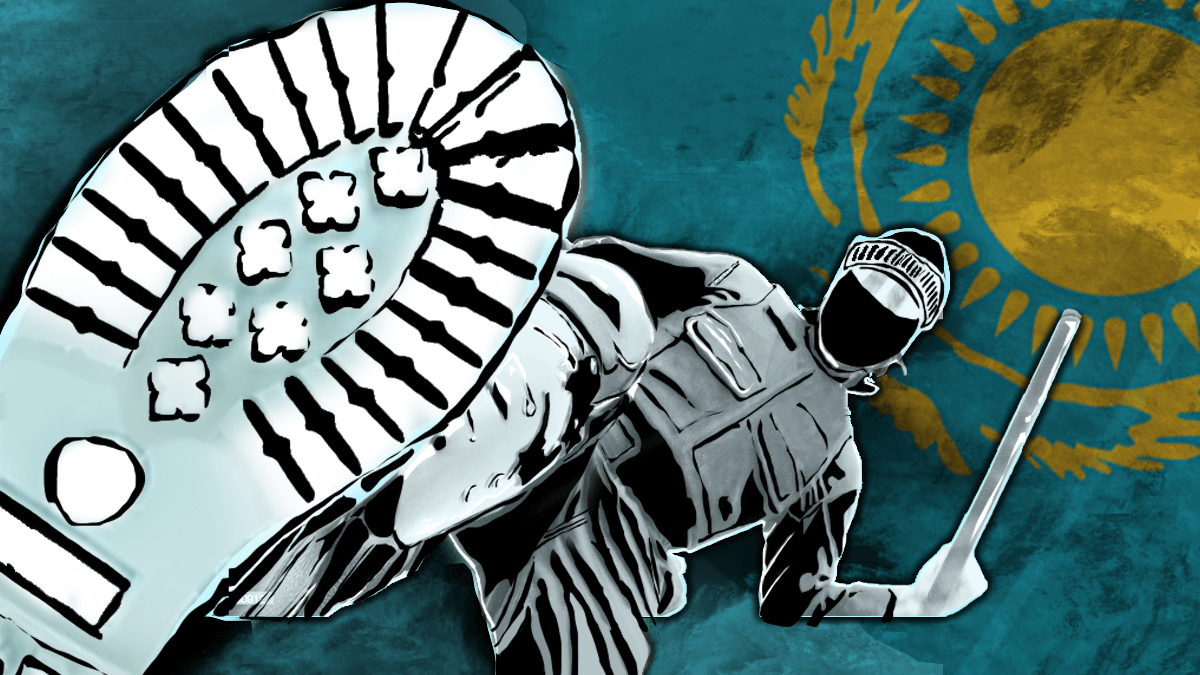 Kazakhstan in Context: A Repressive State

By Lisa Schmidt and Venla Stang

A Legacy of Political Repression

On January 2, 2022, mass anti-regime protests erupted as a reaction to the sudden sharp increase in liquefied petroleum gas (LPG) prices. During the week-long violent unrest and crackdowns, President Kassym-Jomart Tokayev declared a state of emergency a few days later, and requested the Collective Security Treaty Organization (CSTO) to deploy troops into Kazakhstan. The protests ended on January 11, 2022, after the security forces were issued a “shoot-to-kill” order by President Tokayev, leaving over 250 people killed, and over 10,000 arrested. The protests began in Zhanaozen, echoing the 2011 Zhanaozen massacre.

Kazakhstan was a part of the Soviet Union until December 1991, when it became the last Soviet state to declare independence. Despite independence, a Soviet-type authoritarian regime remained in place. Soviet-elected President Nursultan Nazarbayev stayed in power for nearly 30 years (1990–2019), implementing relatively friendlier policies toward foreign investment and trade, but also continuing the Soviet-inherited practices of political repression and pervasive corruption. Although claiming to “create a modern democratic state,” no notable political or democratic reforms were seen under Nazarbayev’s rule. Consequently, due to decades of authoritarianism, Kazakhstan continues to lack a free and fair electoral process, a critical civil society, an independent media, and judicial independence, while all levels of government exhibit a high degree of corruption.

Kazakhstan’s current president, Kassym-Jomart Tokayev, along with the country’s executive and legislature were not elected through free and fair elections. The 2019 presidential election, which followed the resignation of long-term President Nursultan Nazarbayev, lacked true competition in a level-playing field because of the regime’s systematic repression against members of the opposition. President Tokayev won 71% of the votes in a tightly-controlled race that delivered a favorable outcome for the regime. Furthermore, the January 2021 parliamentary elections saw Kazakhstan’s ruling party dominate an election that lacked any meaningful competition — not even the one and only registered opposition party made it to the elections. As conveyed by the Organization for Security and Co-operation in Europe (OSCE), “the campaign was not competitive, and voters had no genuine political alternatives to choose from.”

Following its Soviet roots, the regime harshly cracks down on civil society organizations, freedom of expression, and any opposition to its rule. For example, freedom of press is severely limited in Kazakhstan, as most media is owned or funded by the state, and the few independent outlets that do exist operate under heavy restrictions. This has been the case since Kazakhstan became a communist state under the Soviet Union. Journalists continue to face harassment, arrest, and prosecution, simply for carrying out their work. Individuals — in particular, activists and members of the opposition — remain fearful that expressing their views will be met with retribution from the government, as they are frequently targeted and detained by the regime. Their trials remain unfair, as the president appoints or nominates judges based on the recommendation of the Supreme Court Council, which in turn is also formed by the president and leads to an absence of independence of the judiciary. In prisons, the use of torture and ill treatment is prevalent. Furthermore, the government also maintains strict restrictions on freedom of assembly, making protests of any kind exceedingly rare.

Based on the above, HRF classifies Kazakhstan to be an authoritarian regime, and Freedom House categorizes it as being “not free.”

The 2011 Zhanaozen Massacre was among the most egregious examples of repression in Kazakhstan prior to the January 2022 crackdown. On December 16, 2011, about 5,000 people gathered at the central square of the oil-worker town Zhanaozen to celebrate Kazakhstan’s Independence Day. The square was partly occupied by oil workers who had been on strike for seven months to protest low wages, poor working conditions, and restrictions to labor unions. For months, the police had repeatedly arrested and beaten the strikers. On the day of the massacre, on December 16, 2011, clashes erupted when unidentified men in oil company jackets destroyed sound equipment on the stage that had been set up for the celebrations. In response, the police opened fire on unarmed oil workers and others on the square. At least 17 people were killed and hundreds injured. In the later trial, 34 oil workers were sentenced to lengthy terms of imprisonment, without investigating their claims of use of torture in the interrogations. Five officers were convicted for “abuse of power,” but no officers were held accountable for the killings.

The Zhanaozen Massacre marked the starting point of a wave of serious human rights violations in Kazakhstan. The massacre sparked mass arrests and repression against political opponents and tight control of independent media. Furthermore, in 2014, the regime introduced a new repressive trade union law which led to the closure of independent trade unions. Only in 2020, after repeated examinations by the International Labor Organization (ILO), the regime adopted some amendments to the law. In the years following the Zhanaozen Massacre, despite labor leaders being imprisoned, spontaneous strikes have remained common.

Collaboration with Other Authoritarian Regimes

Due to its location between Russia and China, Kazakhstan holds strong trade and ideological ties with these repressive regimes, but also with those in Belarus, Kyrgyzstan, Saudi Arabia, Turkmenistan, and Uzbekistan.

Kazakhstan is a member of the Collective Security Treaty Organization (CSTO), informally referred to as the “Russian mini-NATO,” together with Armenia, Belarus, Kyrgyzstan, Russia, and Tajikistan. The 20-year old CSTO has mostly been a symbolic anti-Western body without much international significance. Its January 2022 intervention in Kazakhstan was first of its kind in CSTO history. Indeed, the CSTO accepted President Tokayev’s request of January 5 within hours and the first Russian troops landed in Kazakhstan on January 6. In total, about 2,500 CSTO troops arrived in Kazakhstan to “secure key infrastructure.” The withdrawal was completed on January 19. Tokayev’s move to call in the CSTO to support his authoritarian regime creates a clear precedent for other authoritarian rulers of Central Asia.

Preserving autocracy is a primary goal for the CSTO. Similar to the CSTO, the functionality of many regional organizations formed by authoritarian regimes is low. Instead, the organizations provide rhetorical endorsement, a focal point for the authoritarian leaders to meet and learn from another, and a framework within which to redistribute resources. For example, Kazakhstan is a member of the Shanghai Cooperation Organization (SCO), along with countries under authoritarian rule such as China, Iran, Kyrgyzstan, Pakistan, Russia, Tajikistan, and Uzbekistan. It is also a member of the Commonwealth of Independent States (CIS) along with other countries ruled by authoritarian regimes, such as Azerbaijan, Belarus, Kyrgyzstan, Russia, Tajikistan, Turkmenistan, and Uzbekistan. Both the SCO and CIS perform, amongst other things, dubious election monitoring aimed at legitimizing unfree and unfair elections in fellow authoritarian countries. In 2021, the SCO monitored Uzbek presidential elections and Kyrgyz parliamentary elections — recognizing them transparent and democratic. The CIS election monitoring missions recognized the 2019 parliamentary elections and the 2020 presidential elections in Belarus as fair.

In contrast, the OSCE election observers arrived at opposite conclusions regarding the elections in Uzbekistan, Kyrgyzstan, and the parliamentary elections in Belarus. The OSCE was not even invited to observe the 2020 presidential elections in Belarus and the elections have been widely deemed unfair. The OSCE and its election monitoring body Office for Democratic Institutions and Human Rights (ODIHR) are widely recognized as legitimate and credible bodies that follow a long-term, consistent, and systematic election observation methodology, promote democratic values, and cooperate with the United Nations. In contrast, by recognizing each others’ clearly unfair and unfree elections within the frameworks of regional organizations, such as the SCO and the CIS, authoritarian regimes seek to legitimize their power and maintain authoritarianism.

Kazakhstan is a loyal Russian ally, a member of the Eurasian Economic Union, and home to Russia’s Baikonur cosmodrome — the world’s main spaceport and only working launch site to the International Space Station. Tokayev’s request for assistance from the CSTO in January 2022 will likely strengthen Kazakhstan’s and Russia’s partnership but also put Kazakhstan in a political debt to Russia. Russia’s president, Vladimir Putin, claimed victory in defending Kazakhstan from what he described as a “foreign-backed terrorist uprising.” Supporting fellow autocrats is Putin’s way of preserving a Russian sphere of influence in the former Soviet space, including Kazakhstan.

Another superpower authoritarian neighbor, China, has a significant economic partnership with Kazakhstan. The Chinese dictatorship has invested tens of billions of dollars in Kazakhstan and used the country as a launching-pad for the Belt and Road Initiative (BRI) — the regime’s massive infrastructure initiative, launched in 2013, aiming to connect Asia with Africa and Europe via land and maritime networks. Through the BRI, China practices a form of “debt-trap diplomacy” by offering loans and infrastructure projects to gain influence abroad and to export its authoritarian model of government. In Kazakhstan, corruption and deepening ties between Chinese and Kazakhstani elites through the BRI have likely strengthened authoritarianism. The regime has also shown its readiness to sacrifice respect for human rights to maintain good relations with China. China’s authoritarian president Xi Jinping congratulated Tokayev on the violent January 2022 crackdown in Kazakhstan.

Given the legacy of political repression by Kazakhstan’s regime and its collaboration with other authoritarian regimes, it is crucial to focus the world’s attention on the ongoing human rights abuses in the country and to advocate for free and fair elections that comply with international standards.